Maurice Prendergast was born in St. John's, Newfoundland, on Oct. 10, 1859. When his father's grocery business failed in 1861, the family moved to Boston. He and his younger brother Charles finished their formal education by the time each was 14. Maurice worked in a dry-goods store, lettered show cards, and began sketching landscapes and cattle. In 1886, he and his brother worked their way to England on a cattle boat; they may have gone to Paris as well. Returning to Boston, they worked at routine jobs in order to save $1,000 for a return to Europe. Maurice went to Paris in 1891 and studied with Jean Paul Laurens at the Académie Julian. He made rapid progress in 3 years, working from the model rather than from casts. He was fascinated with the life and movement in the parks, boulevards, and cafés.

When he returned to America in 1894, Prendergast was an accomplished watercolorist and had assimilated qualities from Édouard Manet, James McNeill Whistler, Edgar Degas, Henri de Toulouse-Lautrec, Pierre Bonnard, and Édouard Vuillard and from Japanese prints. He was the first American artist to appreciate and understand the importance of Paul Cézanne. Until 1905 the Prendergast brothers lived together in Winchester, Mass., their principal means of support being a frame-making shop. Maurice's work was included for the first time in a public exhibition at the Pennsylvania Academy of Fine Arts in 1896; there was a one-man show in Boston the next year, and from this time until his death his paintings appeared in many exhibitions. 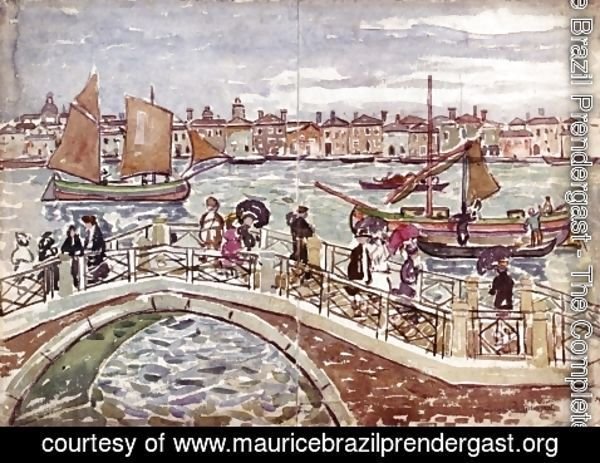 In 1898 Prendergast went to Venice, where he created some of his most enchanting watercolors. Arthur B. Davies invited him to join with other artists in the famous exhibition of "The Eight" in 1908, organized as a protest against the conservative tendencies of the National Academy of Design. Prendergast was in France again in 1909 and in Italy in 1911. The influence of Paul Signac is perhaps to be observed from this period.

The seven watercolors that were included in the celebrated Armory Show in 1913 revealed Prendergast as a major figure in American painting, probably the greatest of his generation. He was perhaps the first to deliberately abandon a primarily representational approach to art and to let the subject matter be dominated by purely artistic means. 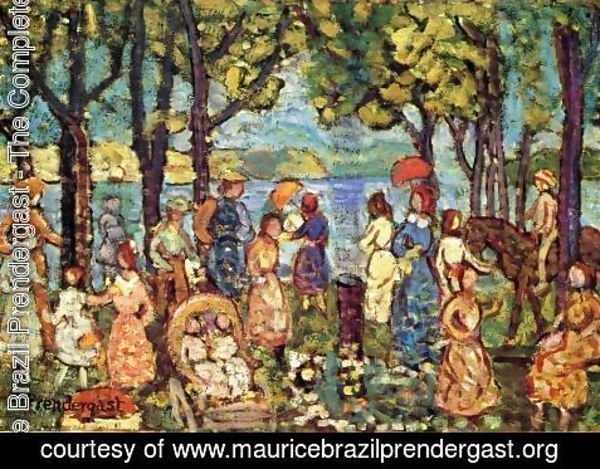 Prendergast went to Europe for the last time in 1914. On his return he and his brother (also a painter) moved to New York, where Maurice spent his last decade working in a studio in Washington Square. During summers in New England, he painted in oil and watercolor brightly clad figures on beaches and in parks, often using a kind of pointillism which gives his work a tapestrylike quality, sometimes with almost expressionistic intensity, but relying even more on pure color, loosely applied in abrupt areas, to suggest form, movement, and texture. There is a combination of wistfulness and gaiety, a sense of elegance and innocence in his paintings. He characteristically introduces large numbers of figures; a sense of individuality is avoided, but there is always warmth and charm.

Prendergast was increasingly isolated in his later years because of deafness. He died in New York on Feb. 1, 1924.